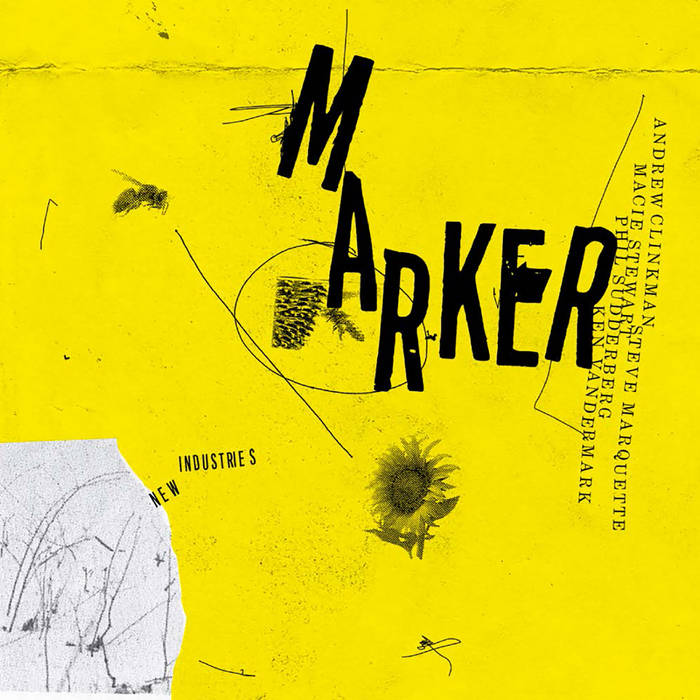 Matt Banash In the fast food age we live in a release this size might seem imposing, but this is liberating.

sjbang88 I love this album because Macie Stewart is a member of the band. Favorite track: Alphaville #2/Trance/Alphaville #1.

Sean Clark Having listened to his music for over 20 years, it seems that with Marker Ken has achieved a highly successful synthesis of his many avenues of expression, and a fecund vehicle for his compositional talents. May Marker thrive for years to come!

John Cratchley I’ve supported and listened to KV’s music for so many years now that it would be a pointless exercise to attempt to add any more written material to that I’ve posted over the years, but here is what I think:
His music is now part of me...I don’t want to quantify it in any way...it would feel like dissembling...all I know is that his music moves me and makes me better for having it in my life. I’m an old man now and it’s affected me in immeasurable ways. Above all, I respect its (the music and KV’s) humanity and integrity. He works so hard and always strives to add to the lexicon. I think he, like me, is an auto didact...always looking to learn, always trying to make relevant connections. I want him to be making music long after I’m gone...sorry to ramble.

The Best Jazz on Bandcamp: March 2019

"New Industries is a fascinating conversation of dissonance and groove, appealing to both the listener who wants something catchy and the listener who wants to burn it all down. The quintet of multi-reedist Ken Vandermark, drummer Phil Sudderberg, keyboardist-violinist Macie Stewart, and guitarists Andrew Clinkman and Steve Marquette walk the fine line between these opposite forms of expression. Additional intrigue is generated by a double-disc comprised of studio and live versions of new material, which provide an opportunity to compare side-by-side how the quintet approaches the material in two very different settings."
-Dave Sumner


Marker includes Andrew Clinkman and Steve Marquette on guitar, Macie Stewart on violin & keyboard, Phil Sudderberg on drums, along with Ken Vandermark on tenor, baritone, and Bb clarinet. The band has received critical acclaim for their first two recordings, Wired For Sound (***** from The Free Jazz Collective, February 21, 2018), and Roadwork 1/Roadwork 2/Homework 1 (Number Three on the Free Jazz Blog, New Ears Album of the Year per the People 2018; three top ten 2018 critics picks from The Free Jazz Collective).

Their third album, New Industries, is a double CD comprised of studio and live versions of a dozen new compositions by Vandermark. The studio album was recorded in Chicago at Experimental Sound Studio on July 15th, 2018, directly after Marker's tour of the Midwest; the live album is a document made of their July 12th performance at Milwaukee's Sugar Maple. The combination of both recordings provides listeners an opportunity to hear the compositional strategies of the music truly come into play. Not only is the music improvised within individual pieces, the spontaneous narrative between each is altered by the way that these compositions are sequenced and layered.

Marker's second book of material was inspired by an exploration of a wide range of music sources, including the work of composer Mauricio Kagel, the post-punk movement, albums such as DNA On DNA, D'Angelo and the Vanguard's Black Messiah, and Brazilian singer Elza Soares' The Woman At The End Of The World (A Mulher Do Fim Do Mundo). These investigations led to a series of exciting developments in the group's material: a broader scope of violin and keyboard timbres, the use of a bass amp for the keyboard adding low frequency power, a new way for the guitarists to perform live while keeping their stereo split intact. Also, to better illustrate the concepts of musical superimposition and open sequencing, some compositions had more than one possible version, and there were a greater set of foreground/background strategies or structural methods within individual pieces, with more consideration paid to "free" playing combinations, and organic vs. pivot transitions. These changes kept Marker's sonic flexibility intact while giving the band's material much more dynamic range and impact.

The end result is a real evolution for the ensemble, a jump forward built on two tours made in the United States during 2018. New Industries is released in conjunction with Marker's first trip to Europe that takes places in the second half of March, 2019. During that tour the group will have concerts in Gdansk, Berlin, Vienna, Budapest, and Antwerp, performing their music and collaborating with improvising musicians during multiple shows in each of those cities.

Thanks to the musicians; to Alex Inglizian and the staff at Experimental Sound Studio; to Adrienne Pierluissi, Robert Szocik, and the staff at the Sugar Maple; to Fede Peñalva, Brock Stuessi, and Joel Villafañe for their assistance at Audiographic Records; and to the listeners.